Driving in Iceland - Rules and dangers

For me, driving in Iceland is more relaxed in many areas than in the rest of the world. In contrast, in some places it also poses certain challenges and possibly even life-threatening risks. On this page you will find my personal list of interesting facts and things worth knowing. The new Icelandic traffic laws from January 1, 2020 have already been taken into account.

In Iceland you drive on the right side of the road. Seatbelts are compulsory in all places and the use of a mobile phone while driving (except hands-free kit) is prohibited. Unfortunately, the general lighting requirement is often overlooked or forgotten. It must be driven during the day with the low beam switched on.

The maximum speed is 50 km/h within cities. 90 km/h on paved roads outside and 80 km/h on gravel roads . From January 2020, the speed limits will increase to 110 km/h (68 mph) if the opposite lanes are separated and the conditions allow it. Numerous stationary radar controls are placed all over the country. Once you know what these devices look like, you can recognize them early thanks to the extensive landscape. The mobile measuring devices, which are also used, are less noticeable. A speed violation can be quite expensive (between 100 and 400 Euros).

There is no"traffic jam". At least for troubled commuters from mainland European cities. Icelanders see it differently. The traffic in the capital usually flows unimpeded, but there are places where it clumps (especially in the morning from the suburb of Mosfellsbær to the rush hour). In 2019, a so-called Rush Hour and Pollution Toll was introduced to reduce car traffic. The toll should be collected electronically and only at peak times. So far, these plans have not been implemented.

What many motorists often ignore at home: Blinking , not when entering, but only when leaving the roundabout. What is completely different in Iceland from the rest of the world and will not change in January 2020 is the rule that drivers in the outer lane must give priority to those in the inner lane . A driver entering a roundabout must use the outer lane to take the first exit. Not only vacationers, but also a self-driving Tesla, had its difficulty with this system ( ( report) ).

Iceland has a good, consistently developed road system. This is divided into national roads, municipal roads, public paths and private roads. However, the following unofficial categories are much more important for vacationers:

1. Roads that you can easily drive with a normal (rental) car . This includes all roads in Reykjavik and other cities as well as the ring road and a total of almost 4,500 km on 'primary road'

2. Roads that you can drive with a normal (rental) car, but where good insurance is important. This includes all gravel roads that are not expressly blocked for cars. You often come across such slopes when you leave the ring road to get to a sight. It is advisable to drive very slowly and carefully, as the routes are usually single-lane and have alternative places every 100m.

Gravel road to the Hópsnesviti lighthouse on the Reykjanes peninsula

3. Roads that can only be driven on with a suitable off-road vehicle.
This includes all roads that have an"F" in front of the number (F-Roads). Otherwise, as soon as the sign quot;Illfær vegur " (bad road) appears, "end of terrain" is for normal cars. 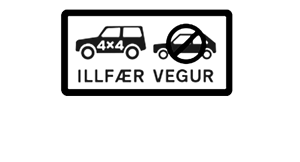 From this sign only cars with four-wheel drive (AWD - All Wheel Drive), 4 × 4 (English Four by Four) and 4WD (Four Wheel Drive) are allowed to drive. Vehicles without this equipment have to reverse. 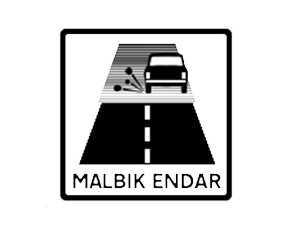 If an asphalt road suddenly becomes gravel, the driver must reduce the speed accordingly. Otherwise there is a risk of the car breaking out and losing control of the car.

Many of the F roads run through the Icelandic highlands. They are only passable for a few weeks a year and are open to traffic. You can check when the individual passes are opened at road.is.

Off-road driving is strictly prohibited in Iceland. Nature, especially the famous Icelandic moss, takes decades to recover from damage. The penalties are accordingly high. The minimum penalty is 350,000 ISK (EUR 2,477, USD 2,781) and higher penalties are often imposed. A Russian"influencer" made negative headlines in June 2019 when he ruined one of the most beautiful landscapes near Mývatn for an Instagram photo with a rental SUV. His fine was 450,000 ISK (3,600 USD / 3,200 EUR).

What Route 66 is for an America trip is the ring road (Hringvegur) for Iceland. As the number 1 road, it has been running asphalt all around the island for 1350 km since 2019. It is particularly popular because it is lined up with many of the famous sights and can be driven on with any rental car without restrictions. It also has an irresistible appeal to cyclists from all over the world.

The ring road and all other main roads (primary roads) are consistently expanded in at least one lane in every direction. Only at narrow points or bridges you have to deal with oncoming traffic - if available. This is always indicated by a sign such as "Einbreið brú" - single-lane bridge or "Einbreið göng" - single-lane tunnel. 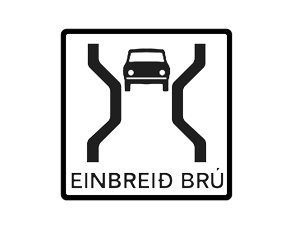 There are always single-lane bridges or tunnels on the country roads. In such a case, the speed must be reduced significantly in order to stop in the indentation if necessary. The rule of thumb is that those who arrive at the bottleneck first have right of way.

Toilets are in short supply in rural areas. Unfortunately, the Betaversion Road Network Viewer is still an insider tip. If you open the application, you can check the "Rest areas" in the menu under "Layers". By clicking on the logo you get further information including the number of toilets (if none are listed, there are none).

But until this application becomes more widespread or the number of public toilets is further increased, this will remain a permanent topic for both locals and holidaymakers. Icelanders understand the needs and desires of tourists. However, there is no understanding of the"legacies". It is simply inexplicable why it is not possible for many to pack the visible traces - biodegradable or not - in a small bag to leave the space as it was found It doesn't matter whether it's leftovers, garbage or the end result of digestion.

Average wind speeds of 50 m / s can occur during a storm. The path to Tröllkonuhlaup remains unforgettable, when the paved road turned out of nowhere for 500 m into an unpaved dirt track. On the broken section you could see the asphalt lying about 2 meters apart from the road. A strong wind had simply ifted off the pavement lon a stormy day and put it down cleanly again. With such forces, it is easy to understand that there are serious accidents - preferably with mobile homes or trucks. These are simply"knocked over" by gusts of wind and swept off the street.
Damage caused by opening the car door in windy weather is not quite as dramatic but quite common and annoying. While one still expects this in a storm, it usually happens unexpectedly that the wind almost pulls the door out of your hand when you get out. Ideally, you should check the wind direction beforehand and park the car so that the door is facing the wind.

Due to weather (winter storms or closures) or unpredictable natural disasters (volcanic eruptions, glacier runs) it can happen that parts of the road system are blocked or destroyed. A good source of information about the currentcurrent state of the road can be found at safetravel.is. .

As you can see, you can't see anything. Iceland in the fog with visibility less than 10m.

Sand or ash storms usually occur due to strong winds in spring or autumn. If there was little rainfall, it can happen from a wind speed of 7-8 m / s that the dry earth or ashes are whirled up to form a storm. Most of the storms occur in the south and southeast of the country. Landeyjarsandur is most at risk. If you are unlucky enough to get caught in a sandstorm, it is advisable to drive as slowly as possible and to honk as an acoustic warning signal for other cars. Perhaps you can also find some way to position yourself, e.g. B. a house or a wall. Here you can see what a car looks like after an Icelandic sandstorm.

The cheaper rental cars do not have a navigation system. During my first stay in Iceland, I wanted to take our mobile device with me until I realized that the manufacturer Iceland obviously does not belong to Europe and there were no corresponding maps. Plan B was Google Maps and a cell phone holder for the windshield. Depending on the type they are about 10-18 euros.At home I have already downloaded the necessary maps and saved the known destinations as favorites. In order to be independent of an internet connection or to not use up an unnecessary byte of my limited data volume, I always use Google Maps in offline mode. The disadvantage, however, is that you don't get any information about the traffic situation. The searches for locations and the navigation work perfectly. And as mentioned - there is no traffic jam. At Google Support you will find a description of how to use Google Maps offline

What to do in an emergency?

The emergency number is 112 worldwide, including in Iceland. This number should always be used when people are injured or in danger. If there is a problem with the car, it is best to contact the landlord. They usually offer a 24-hour hotline. There is no such thing as the AAA in Iceland. As a replacement, you can contact safetravel.is +354 570 5929 for information about the nearest service station or garage.

Animals on the road

In Iceland, sheep or other animals are road users and have right of way, except on the ring road. So if sheep, cows, horses or other animals can be seen on the roadside, you have to take your foot off the gas. It is not uncommon for mother and young animals to suddenly cross the road. If you drive an animal, you have to report it and take over the damage. 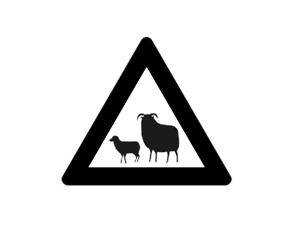 Anyone approaching this sign should be prepared for oncoming traffic that can only be seen at the last second. Here, too, it is important to reduce the speed and drive as far to the right as possible. 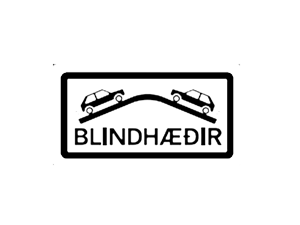 Finally, a few important Icelandic words. If you see this at a roadblock, you have to turn around. LOKAÐ (closed), ÓFÆRT (impassable), HÆTTA (danger) and KÖTLUGOSI (volcanic eruption).