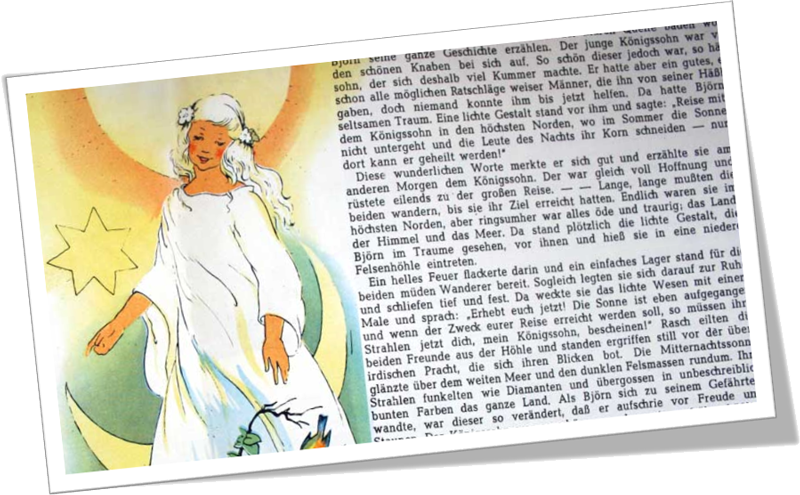 Picture and extract from a German fairy tale book from 1949.

'… The two friends quickly hurried out of the cave and stood motionless in front of the unearthly splendor that offered their gaze. Thr midnight sun shone over the vast sea and the dark rock masses all around. Their steel sparkled like diamonds and poured over the whole country in indescribably bright colors. When Björn turned to his companion, he was so changed that he cried out with joy and amazement ...'

As a child I was lucky to have a grandmother who tirelessly read my favorite fairy tales to me on long, dark winter afternoons. One of them was 'The midnight sun certainly shone on him'. It came from an old, worn-out fairy tale book, passed down from generation to generation. Although the book is already missing several pages and one of the previous owners cut out parts of the pictures, I cannot separate myself from it and still own it today.

But what does a past childhood memory have to do with this blog?

Somehow the end of an Iceland trip always comes faster than I wanted. I hardly felt that I was sitting on the plane back home. In September 2019 my thoughts revolved around the idea of ​​what it would be like if I could put the following dream into practice:

Yes, it was an apparently unattainable vision. But I was confident that somehow it should be possible to make at least part of it a reality!

The project idea was born, but what to start with?

As long as I want

How long is long enough? That was a difficult question that I asked myself and I couldn't really answer. So instead, I wondered how many weeks I could afford to take some time off professionally and privately? The point to be clarified was deliberately aimed at 'the most likely time period'.

What time of year did I want to travel? That was the easiest of all questions. Of course, at the time of the midnight sun. So a few weeks before and after June 21st. During this time, Iceland literally flourish. The temperatures are ideal, the highlands are passable, the whales and puffins are on site and you have almost 24 hours to spend your day ... 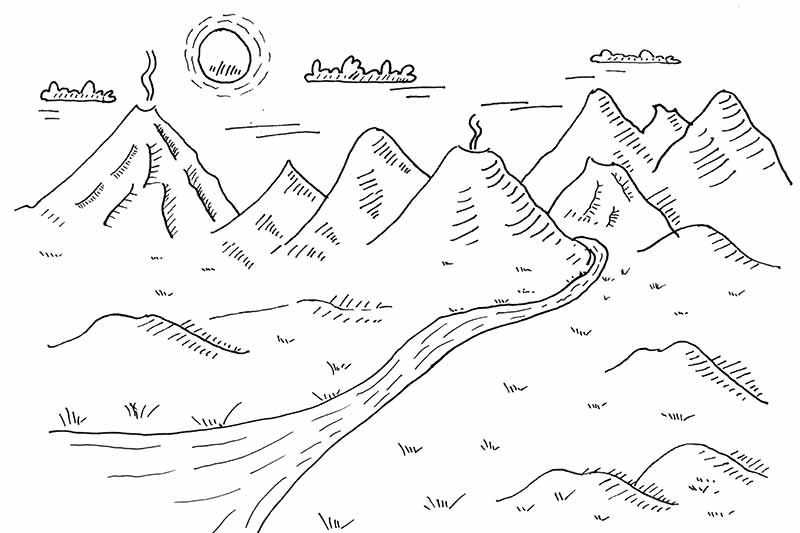 Completely independent of everything

What does independent mean? For me, 'little or no dependency' in principle. So far, I have always been accompanied. On the one hand, I had a lot of advantages, on the other hand, I also had certain challenges. Every person is unique and has certain peculiarities. A vacation together inevitably involves compromises. That doesn't mean it wasn't a wonderful vacation. Rather, it just means that, like everyone else, I couldn't do 100% what I wanted.

An important point for me was therefore that I wanted to travel alone.

The issue of accommodation also had to be clarified. For all previous trips, we had booked the overnight stays in advance.

I am security addicted and I really appreciate knowing in the morning that I will have a bed and a shower in the evening. Unfortunately, the whole thing has little to do with independence. If you want to stay in one place, you have to keep going because the accommodation is already firm. Likewise, you cannot simply drive towards the sun if the booked accommodation is in the bad weather area.

This resulted in a new cornerstone. I wanted to be able to spend the night as flexibly and wherever possible.

The idea that came up was to travel to Iceland with my own car and convert it so that I could sleep in it. Of course, it has been compulsory to stay at a campsite since 2013. But my hope is that it will be easier to spontaneously stay at one of the campsites than to find an affordable hotel room during peak travel times.

Additional requirement. The car must be large enough to be able to sleep in it if necessary.

The last point on the subject of independence that came to my mind were the Icelandic road conditions. Even the ring road is very 'rustic' in some places.
In summer of 2018, we encountered construction work on a section in front of Vík in the south. We had to drive several kilometers on a rough gravel track. At that moment we were extremely grateful that it "only" hit the paint and the underbody of the rental car and not our own car.

Also unforgettable was the path to Tröllkonuhlaup when the paved road turns out of nowhere for 500 m into an unpaved dirt track. On the broken section we could see the asphalt lying about 2 meters apart from the road.
On a stormy day s strong wind had simply lifted off the pavement and put it down cleanly again.

There are also a number of F-Roads in Iceland (F - "Fjallvegur" - mountain road) which can only be driven with an all-wheel drive off-road vehicle. You can only get through the highlands with the right equipment. So I formulated the following requirement:

The car must be equipped with Four-wheel drive and limited slip differential.

So a dream became a goal

After the most important cornerstones had been found, I gave my project the working title 'Project Midnight Sun 2020' and formulated the content: 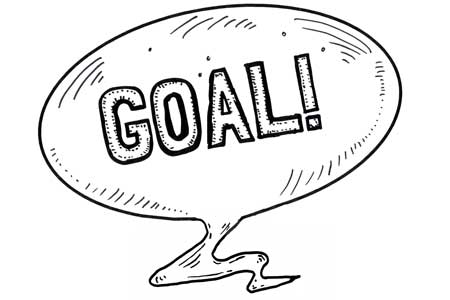 Travel alone in 2020 for 8-10 weeks at the time of midsummer night in an all-terrain car in which you can also sleep.

Now it was possible to pursue the goal in the following weeks and months and to make the dream come true in 2020 ...